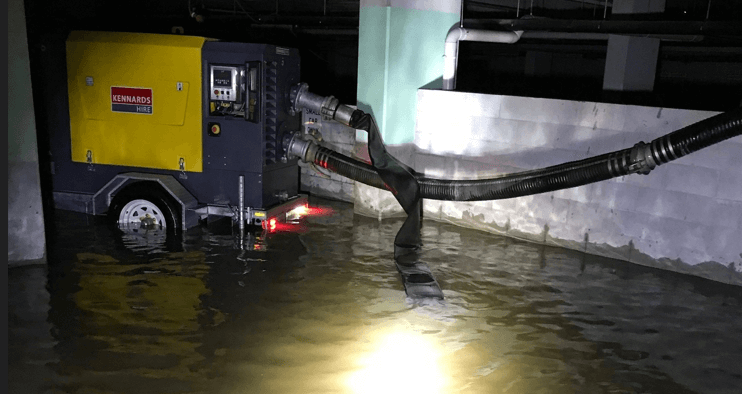 David Bond, the wharves’ Safety, Sustainability and Maintenance Manager used LinkedIn to express gratitude for the fast supply of pumps to the flooded scene as water entered the basement car park at the popular entertainment area overlooking the Brisbane River.

David posted: “Thanks to Kennards Hire and more specifically Dean Muir for being able to organise some serious pumps for us at Howard Smith Wharves at short notice. We have done remarkably well during this time due to many people working together.”

On Monday afternoon, water began steadily rising in the two-storey basement car park at the wharves. When the call for help came in at the Kennards Hire distribution centre at Crestmead, Dean Muir, Kennards’ National Operations Specialist, Pumps, happened to be visiting the premises. He not only assessed what was needed, but also personally delivered and set up the pumps. 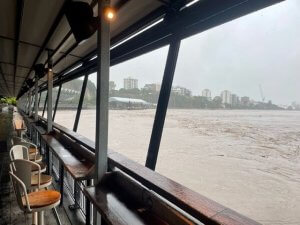 “The call came at 4.15pm,” said Dean. “I got the trailer-mounted pump and hose onto my ute and left 15 minutes later. Within an hour I was onsite. It worked out well.”

“I helped set up the pump and as it got going, saw that they needed a second one. Luckily another had just become available, so we were able to send a larger, skid-mounted pump on a tilt-tray.”

The water had risen to fill the car park’s B2 level, cutting the power switches housed there. As pumping began, the flood began threatening the upper basement level B1 and its switches, which control the venue’s emergency lights.

Dean helped to swap pumps and stayed at the job until 10pm. He notes that Tim Pitman, Kennards’ Specialist Branch Manager, Pump and Power, stayed back at the centre until 8.30pm to receive the second pump and send it on to the wharves job.

At within 100ml of reaching the base of the second power switchboard the flood water stabilised and began to slowly recede.

Dean recalled helping out in a similar capacity during the Brisbane floods of 2010-11 when he was in a different role at Kennards.

“We did a lot of basement pump-outs then, working at Queensland Urban Utilities and the sewage treatment plants,” he said. “We’re used to cleaning up the floods’ aftermath too, and many Kennards people are volunteer workers.”

A number of Kennards branches close to Brisbane are on higher ground and have been untouched by the current disaster, but the Indooroopilly and Rocklea branches had to be evacuated last week, as they are located in low-lying areas.

“We’re in it with our customers,” said Dean. “We know what it’s like to go through this, because our branches are affected as well.”

Earlier the same day as the Kennards’ pump rescue job, Howard Smith Wharves had been closed down due to the safety risk at ground level there from the construction crane that broke loose from a pontoon across the river. The precinct was safely reopened for business on Wednesday 2 March.