The EWPA has played a pivotal role in the development of ISO 21455:2020 and with its release there is now standardisation of a range of specifics for MEWPs, including the location, marking and method or direction of operation related to all types of controls, including the use of finger, thumb, hand and foot operated controls.

Ten years in the making and a result of work which began in 2010 when the UK HSE began looking into MEWP entrapment and control design. This resulted in the reports RR960 and TT961 being published in 2013. Following the publication of these reports the Manufacturers of Elevating Work Platforms Council (MEWPC), later named the MEWP Industry Manufacturers Group (MIMG) was formed.

In 2015 it was proposed by the MIMG that an international standard for MEWP control performance, location, markings and methods of operation be created. And now 5 years later we have at last seen the release of this new ISO standard earlier this month. 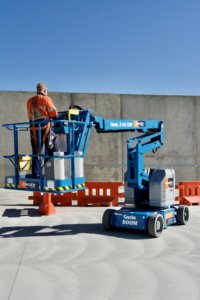 A key component of the development of ISO 21455:2020 was a research project led by the EWPA and IPAF (International Powered Access Federation). A simulated MEWP platform with a multi-position control panel was taken to construction sites and industry events. Operators with varying experience took part in research exercises using the control panel. The data obtained from this research proved invaluable to the members of the standard’s development committee.

James Oxenham the CEO of the EWPA said “The EWPA’s commitment to promoting the safe use of MEWPs has been demonstrated again with the launch of ISO 21455:2020. A new international standard for MEWP controls is great news for the industry and is a result of significant collaboration between manufacturers, regulators, trade associations and their members around the world.

Peter Davis, EWPA Technical Director Operations and Executive General Manager of Fleet at Coates Hire added “The dedication of the EWPA and its members over the past 5 years has played a significant role in helping to develop this global standard, which now provides designers and manufacturers with clear guidance on ensuring uniformity of MEWP controls. This is a great step forward in improving MEWP safety and one in which those involved should be proud of”.

The EWPA took a leading role in the development and implementation of the control direction simulation project, as well as having representation on the standards development committee – ISO TC 214 Working Group.

Peter Wenn, EWPA Technical Director Engineering comments “The EWPA was instrumental in obtaining international cooperation through sponsoring a meeting of TC214 here in Australia and also establishing the global alliance meetings which are now held annually. It was critical that controls were standardised through international consensus, therefore this cooperation was key.

Peter added “As the Standards Australia nominated representative on the ISO TC 214 working group I can confidently say that the participation of the EWPA helped lead to the successful launch of this new standard, particularly in relation to the consistency of the safety controls. It was also critical to have Australian representation on this working group to ensure we represented our stakeholders and members interests.